The Wireless Dongle is an Asset Monitor that is specifically designed to be tethered to another device, through a cable or connector, to enable it with HME Sub GHz (1) and optional Wide-Area-Network (WAN) communications.

As a microprocessor based device, the Asset Monitor has the computing power to host and run very sophisticated software applications. The Asset Monitor's Basic Software Layer cognitively manages its integrated communications subsystems, its integrated data storage, its battery's energy and its remote hardware and software maintenance. An Asset Monitor's Value-Added Software Layer, with access to Basic Software Layer utilities, can host a range of custom sophisticated software applications that enhance and extend its basic software and manage other devices that it interfaces with, a reefer controller is a great example. 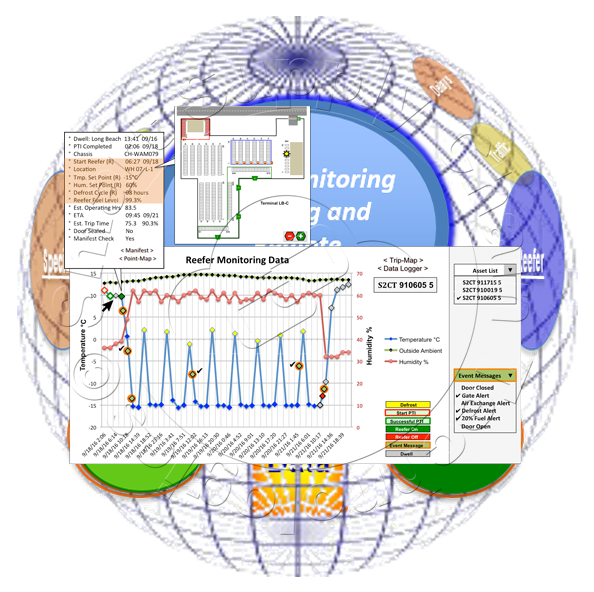 Generally, anything that could be done by a person at the reefer controller's keypad can be done remotely from the cloud. Beyond that, the Asset Monitor "continuously" monitors data from the reefer controller and independently makes adjustments to the reefer's operation or reaches out to the cloud, as it was programmed to do when things go wrong. This is like having the terminal reefer technician travel with the reefer as it moves through its supply chain journey.

(2) Near-Field Magnetic Inductance is very similar to the technology that Samsung and others use for secure wireless payment transactions. Fundamentally, two magnetic fields intersect to form a continuity. In this use model, one field emanates from one device and a second field emanates from a second device. When these fields intersect they form a continuity that allows the devices to communicate with one another. Here, one device provides its ID to a second device. The second device, using some methods, verifies that ID is authorized for communications and associates it with its communications network for further communications.

(3) DNA is a hybrid PPK security concept for devices to authenticate themselves before communicating data between themselves that is based on devices randomly changing their private keys continuously over time and sharing the new key with devices they have previously been associated with.

(4) This device can be deployed without its own IP-67 enclosure when enclosed within the IP-67 enclosure of the device it's tethered to, within a reefer controller box for example, along with other protective treatments, like a Printed Circuit Board conformal coating or potting, to ensure its specific protection against moisture and dust.